This statue, Herr Burkhart,  is the first in Dead Reich, a new series of zombie busts from Quarantine Studio.  This 1/4 scale zombie statue is created with stunning detail and an unbelievable hand-painted finish.  This zombie statue measures about 8 – 1/4″ tall.    Of course a gorgeous zombie statue like this doesn’t come without an equally cool and detailed back story:

Herr Burkhart’s final war cry was cut short by an allied sniper on the Western Front. He died among his fallen comrades, a final death rattle escaping his gaping mouth as explosions and smoke filled the air. A mysterious series of events more than half a century later have breathed life back into his rotten carcass as the first among a resurrected army soon to once again unleash Hell on earth!

Availability:
We first posted this amazingly detailed bust on our site back in April of 2013. To the best of our knowledge this bust, and the series itself, was a limited edition which is no longer being made. Your best bet for finding it will likely be purchasing from a private party. We’ve assembled some links, such as the button below, to help get you started. 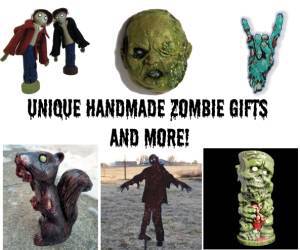